P and I always plan a big vacation every year. In 2012, we decided to road trip from Barcelona through Provence to Montpellier to visit P’s brother and girlfriend. I wanted to share our awesome trip because it will always have a special place in my heart. P proposed to me in a beautiful French provence where we were surrounded by plenty of flowers, food, and love.

We started off in the beautiful Barcelona. Colors were everywhere and I was obsessed with Gaudi! I had visited with my family when I was in high school but P had never visited this part of Europe. So, I was incredibly excited to show off this amazing city. We had a plan to hit every major tourist attraction in four days but ultimately decided to just go with the flow (I’m so not good at doing that …). When in Barcelona, do as the Spaniards do: drink wine and take your time.

The first day, we wandered around the city to get our bearings. As we rounded a corner, we saw the facade of the Casa Batllo (our first glimpse of Gaudi), and as we continued walking, we approached Las Ramblas, a vibrant area that spanned for what seemed like miles of street performers, tapas and souvenir kiosks. On our second night, we enjoyed the Mediterranean sea on a sunset catamaran cruise with Catamaran Orsom. Afterwards, we walked down the Gothic Quarter and found a great little restaurant to stuff our faces with seafood paella and tapas. The highlight of our so very short visit? Park Guell and the still yet to be completed Sagrada Familia. In Park Guell, I felt like a child that had discovered the most awesome playground! Every part of the park was absolutely amazing! The Sagrada Familia never fails to impress me. Even though I had seen its splendor six years before, I was still in awe of Gaudi’s imagination. Our departure from Barcelona was bittersweet.  I was sad to leave, but excited for the adventures ahead. 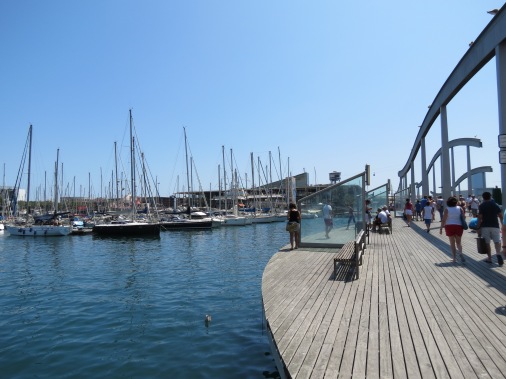 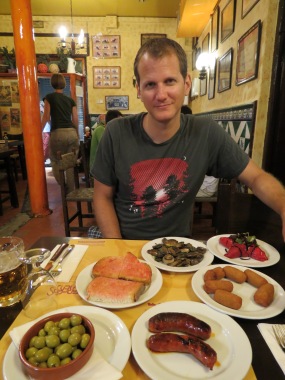 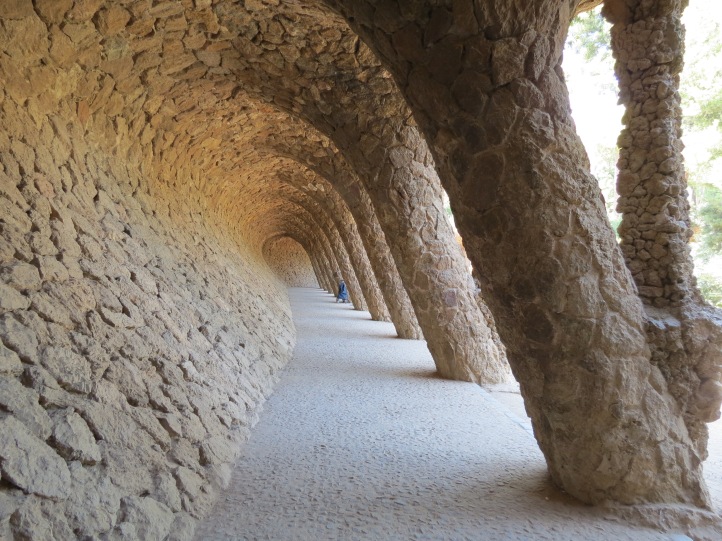 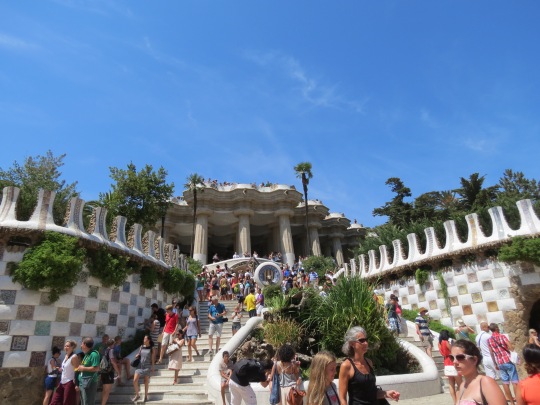 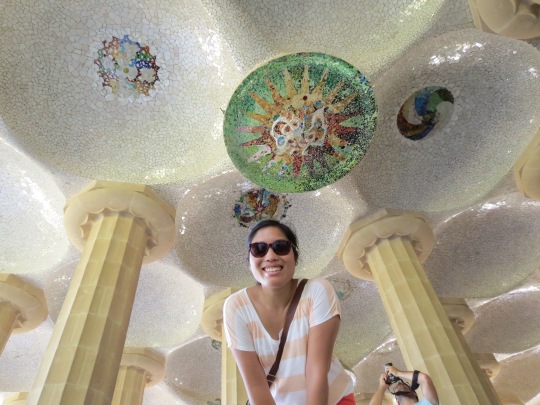 In our little Ford Fiesta, we sped through the Barcelona highways and other cities in Spain, making little stops on the way for food and gas. A 6 hour drive in total with all of our stops. Our hearts would soar when we found a gas station that was cheaper than the one before, and we would treat ourselves to an 8 euro espresso and 5 euro croissant. The French countryside on our way to Aix was nothing much to see, but as we started approaching Aix, my spirits lifted. Gorgeous colorful farmland raced by us on the highway, and little villages began peering through the rows of lush trees.

Aix was everything I imagined. A good friend had studied abroad there and raved about how quaint and wonderful this city was. Cobblestone streets. Stone architecture. Mid-day strolls through the city square farmer’s market. Fresh fruit and veggies. French cheeses. Lavender galore. Buttered pastries. Our hotel was nestled right near the center of this little town. P and I had decided to splurge on a nice hotel during our stay here, so we chose the beautiful Hotel Aquabella. What sold me was that there was a balcony in each room, a room included full use of the spa, and the pool was AWESOME. The pool was indeed awesome, the full spa was fabulous, and the bed in the room was absolutely incredible (slept like a baby). On the evening of our arrival, we enjoyed some red wine and chocolate with our balcony doors wide open and cheesy love songs playing from P’s laptop. The night was quiet, and we finally began to unwind…

On our second day in Aix, we picked up some local cheese, sandwiches, salami, macaroons, and a bottle of wine at the farmer’s market and drove to Gordes a little less than an hour away. We found a nice spot (a grassy area with the least amount of ants…) to picnic with views overlooking vineyards, farmland, and other small French villages. While we were admiring our feast and cheering to our summer vacation, P proposed to me with some sweet words and a beautiful ring. I was so excited that I forgot all about squishing the ants that had started infiltrating our picnic blanket. We then happily devoured the food in silence and enjoyed the view below us.

After our picnic, we explored the town of Gordes, still high on our recent engagement, the delicious food, and the fact that we were in France. The town of Gordes is settled on a mountainside and is surrounded by so much green. There were tons of tourist packing the lavender and linen shops and prices in this little town were steep. So, after about half an hour, we headed back to Aix. On our way back, the scenery was like out of a Monet painting. Flowers, flowers, and flowers filled the countryside. Small family-owned vineyards appeared every few miles. Towering trees lined the dirt road. It was during this time that I so wished our Ford was a Mini-Cooper convertible. That evening, we relaxed at the hotel spa, finished our three varieties of olive tapenade and french bread on our hotel balcony, and passed out that night blissfully happy. 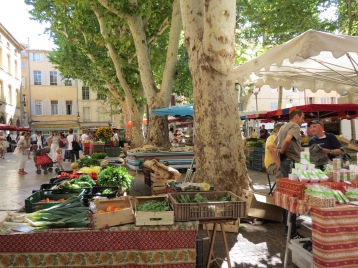 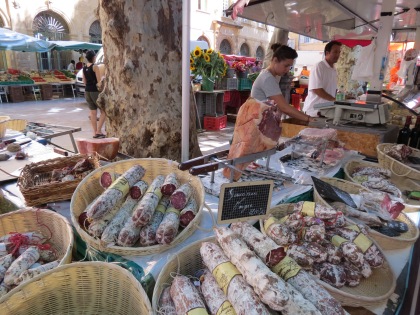 Our next destination was Montpellier where P’s brother, C, lived with his French girlfriend, L. The first night we dined on their terrace with L’s large family that was visiting from their hometown in Northern France. All conversations were in French as we sipped white wine and slurped fresh oysters. In the beginning, I tested my four years of high school French and tried to put it to good use. But, after 15 minutes, I just laid back against my chair and absorbed all the wonderful Frenchness that evening.

The next day, C, L, P, and I played tourist in the city center. The highlight was the aquaduct at the end of a beautiful park that reminded me of Paris with the perfectly placed sculptures and trees. Then it was a light lunch with beer and wine amongst moss sculptures outside in a plaza with a small church and a music school. After lunch, we browsed family owned antique shops along the plaza and strolled through the fairly quiet streets of Montpellier center. Everything here was so slow paced and quaint… a huge contrast from Boston and San Francisco’s swarming crowds and cars. 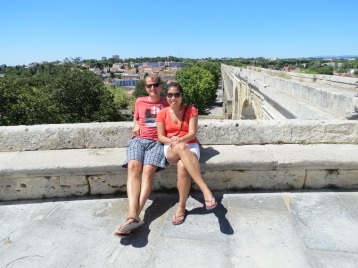 The following day, we drove to a nearby beach where tons of locals were kite surfing. After about 5 minutes at the beach, P and I realized that we were at a nude beach. At the best nude beach in the area according to L. We just laughed it off and soaked in the sun (not nude) on our thin beach towels that we purchased at a local convenience store. We took dips into the refreshing water and had a fabulous beachside gourmet seafood feast with tuna tartare, shrimp salad, fresh mussels, pan seared fish, and we can’t forget the mac n’ cheese… with French cheese of course. 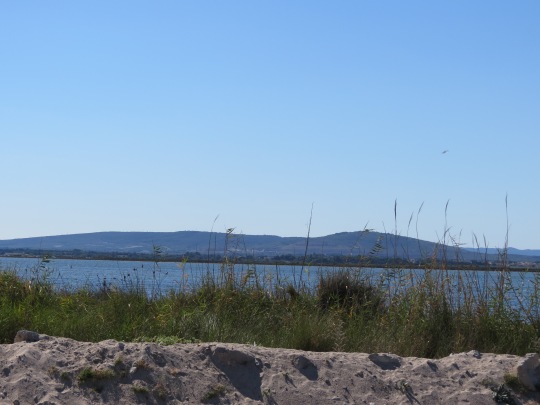 The next morning, we set off for a little town west of Montpellier with the cutest name, Saint-Guilhem-le-Désert. L had seen it on the French newspaper as a fun spot to explore. So off we went in our little Ford Fiesta through the winding country roads of France. More gorgeous vineyards, towering trees, and sunflower farms. Upon arrival, we took a local bus to cross the bridge into the historical town. The most imposing landmark in the town was the Abbey with its lovely columns and Medieval personality. The rest of the town was booming with seasonal artists from painters to sculptures, who visited the town in the summer for inspiration and solitude. Although the summers are filled with artists and French tourists, it seemed like a place that slept in the winter with only a few locals that stayed behind to take care of the town.

Right outside of the town and under the bridge was a calm river with a beach filled with large umbrellas stabbed into the small pebbles that filled the beach and plenty of locals enjoying the sun. Being that it was ridiculously hot and humid, I had eyed the deliciously cool river since our arrival to the town and was pleased when L suggested we go for a swim. We set up camp with our snacks and towels and immediately ran into the cold refreshing water. I loved being amidst the locals and pretending to be French for a few days with C and L. I tried to savor the last few minutes in Saint-Guilhem-le-Désert laying in the river and letting my hair swish through the water. Next stop? Back to Barcelona! 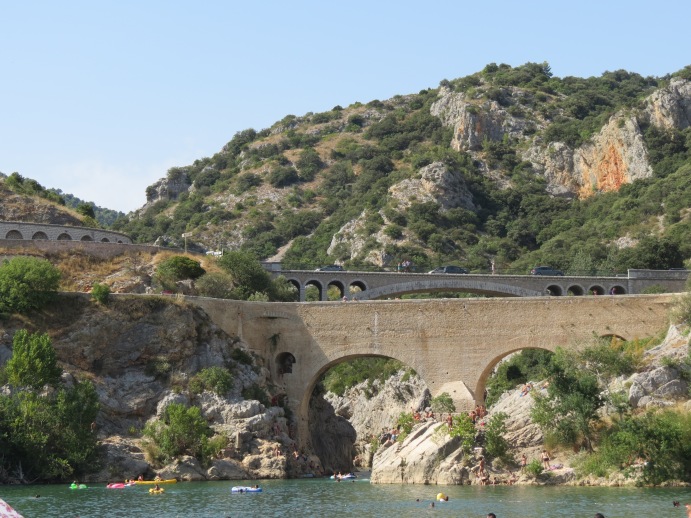 We didn’t arrive back to Barcelona until later in the evening. On our last night, we ate a quick meal of pasta and wine, slept for a few hours, and we were off to the airport back to Boston. Vacation over but newly engaged!

One thought on “Road trip! Through Spain and France”