I was most excited for Chiang Mai, and intentionally put our visit at the end of our Thailand trip. Some people really love Chiang Mai while others prefer the coastal cities. P and I fell into the first category. We absolutely loved Chiang Mai! It is the most culturally significant city in Northern Thailand, the weather is ten degrees cooler than Phuket, and is less expensive than Phuket. The locals were beyond friendly and the surrounding mountains and landscape were so refreshing and beautiful.

I booked our Chiang Mai hotel, BED, through Expedia based on the super low price and the modern rooms. I couldn’t find much information or photos on the hotel. But, the price was too good to pass up, the location was central in the Old Town, and I was feeling spontaneous.

Turns out, the hotel was brand spanking new, and we were its first guests! One of the hotel owners, a professor/entrepreneur from Amsterdam, personally greeted us at the lobby. Of course, there was a bit of last minute construction being finished, but aside from some light dust, the hotel was perfectly comfortable. The decor was black and white chic with a very Scandanavian feel. There was complementary espresso, complementary fruit and snacks were stacked at the large bar, and beautifully designed bottles of water lined the many large glass refrigerators in the lobby free for taking. The rooms themselves were large enough, each with a balcony or patio, and the beds were wonderful (hence the hotel name “BED”). We were able to speak to the hotel owner every morning and evening and really began to appreciate the design work that went into the hotel. There are plenty of good street food and restaurants in Chiang Mai. Because we only had 4 days here, we didn’t have a chance to try everything. A little advice would be to stay away from Rachadamnoen Alley, which, in my opinion, was too touristy. The food there is pricier and not as authentic. If you go just one block up to Intrawarorot Road, there’s delicious street food and restaurants for half the price.

We were able to try two restaurants while in Chiang Mai. One was just around the corner from our hotel and the other we were recommended by a friend. Both were amazing!

> SP Chicken: Roasted chicken. Need I say more? It was absolutely delicious. The papaya salad, veggies, and other side dishes were yummy too! This place was just outside of our hotel, near Wat Phra singh. > Khao Soi Khun Yai: This place is a hidden gem and THE place to get khao soi, a popular northern Thai dish which consists of curry soup with noodles and meat, topped with crispy noodles, and served with pickled cabbage and onions. When we arrived, the place was packed with locals getting their afternoon pick me up, eating two or three bowls of khao soi in one sitting. At only 30 baht per bowl (~$1), it doesn’t break the bank. They also have fresh juices to wash down that yummy spicy noodle soup. I’ve been searching stateside for this particular dish but have yet to find it here. So, take advantage and slurp as much khao soi as you can in Chiang Mai. > Sunday Night Market and Bazaar: A large night market with not only Thai souvenirs but also amazing art work by local artists. P and I bought two large wooden sculptures, which we had to hand carry all the way back home… (thank goodness Chiang Mai was our last stop…). There were silk scarves, purses, jewelry, hipster knick knacks, postcards, electronics, clothes, etc., all were surprisingly good quality. There was also food carts to fuel the shoppers and vendors. We easily spent 3 hours wandering the market, eating, and getting foot massages. 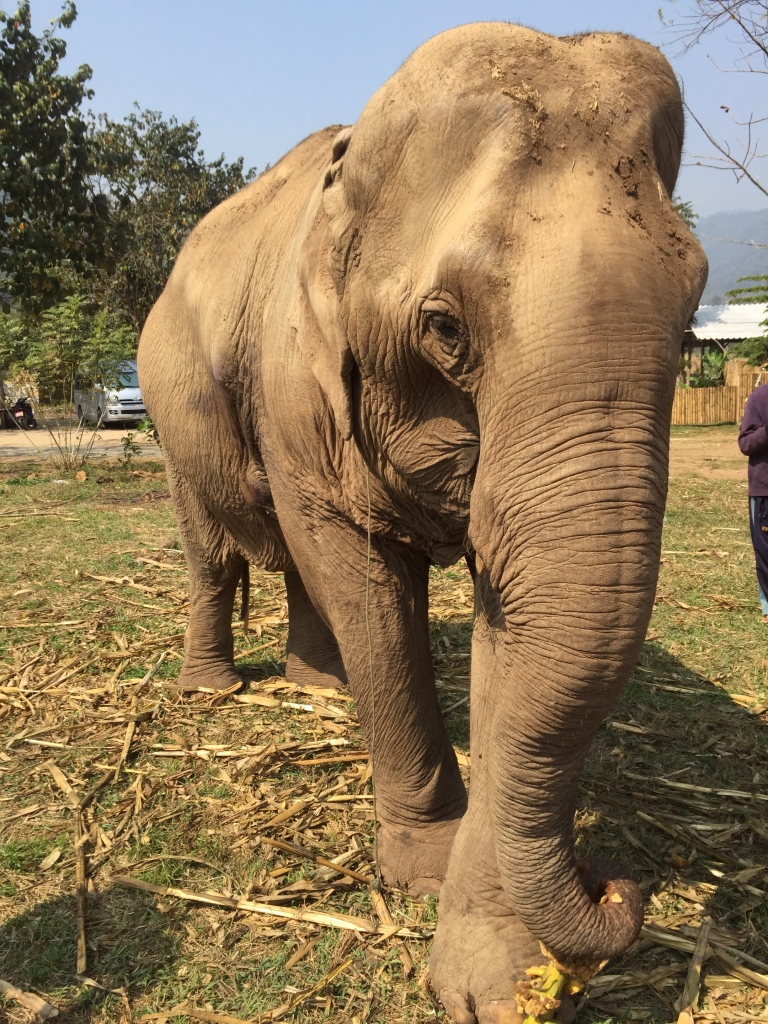 There were so many companies to choose from with different experiences and different pricing, but a good friend recommended Happy Elephant Home, which was a reasonably priced elephant farm wherein guests feed, care for, bathe, and wash the elephants. It was an experience unlike any other, and we had a blast. We started out by feeding the elephants to get to know them a little bit better. Then we ventured out to the mud baths, which were essentially the elephants’ toilet hole. While all the young backpackers and college kids jumped right into the mud hole playing with the elephants, P and I hesitated. I only put my feet into the mud and gave the largest elephant on the farm a good mud scrub, but P refused to enter entirely. After lunch, we cut fresh sugar cane for the elephants and headed to the river to give the elephants a bath. The river was the elephants’ second toilet hole… but this time, we were much more willingly to jump in because at least in the river, there was a current (we just tried to stay upstream).

Our names in Thai branded in marker on our hands so that the tour guide could remember our names. We were also required to wear this silly get-up, which kept us relatively clean and protected from the sun. We were also given totes to carry around treats for the elephants. 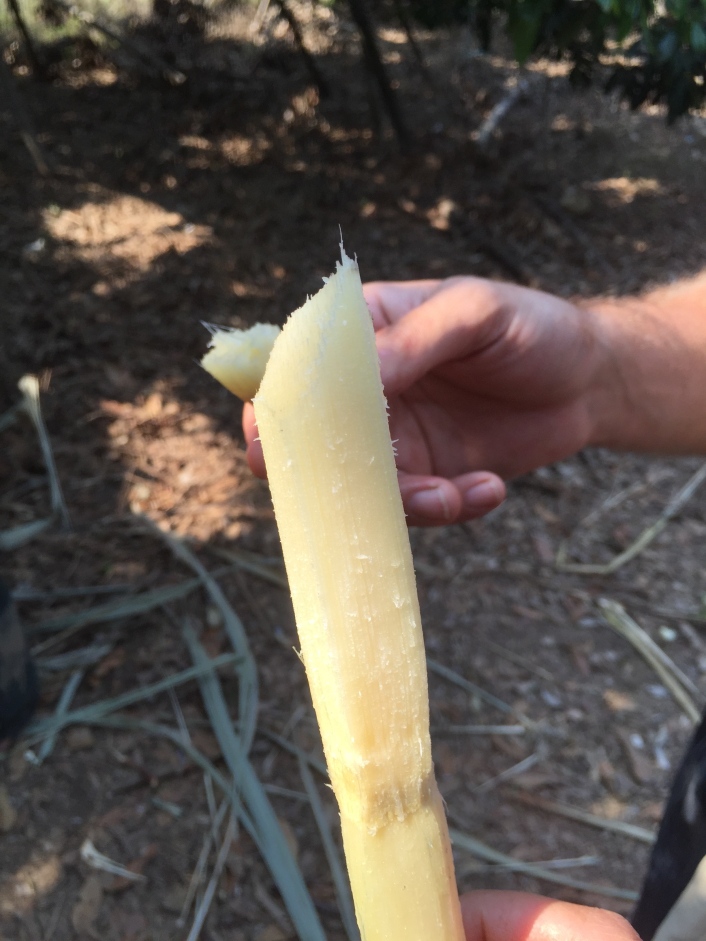 Visited a sugar cane farm where we learned how to cut sugar cane. The fresh sugar cane juice is so delicious! 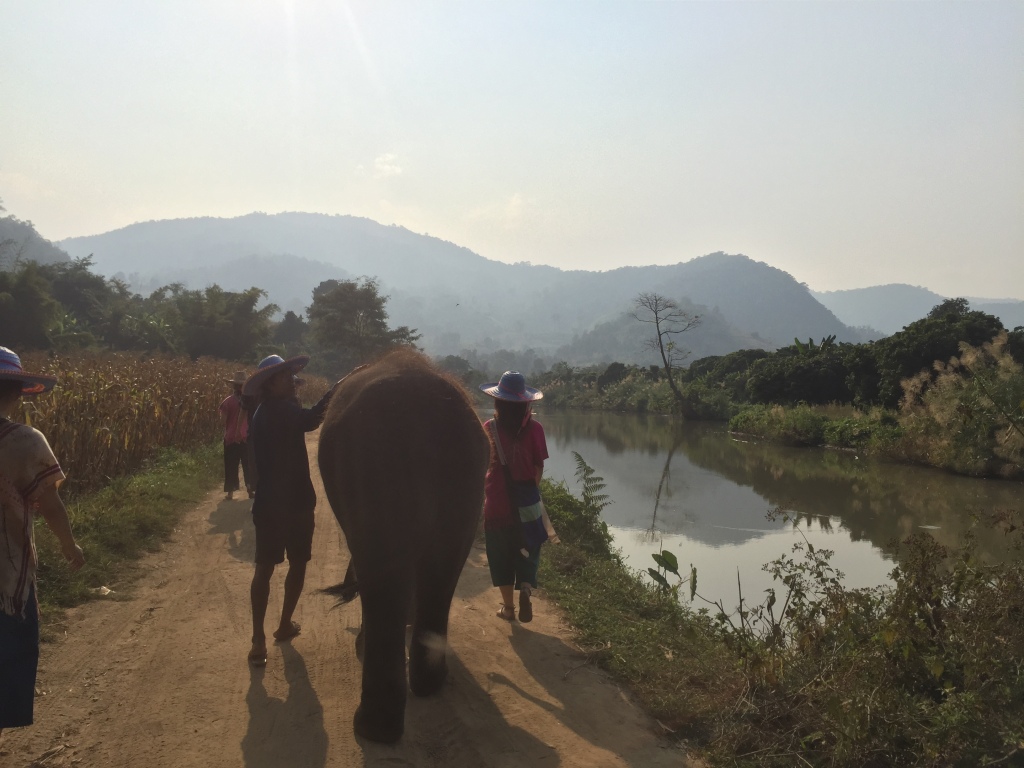 While the others attended to the two younger elephants who were much more playful, I fell in love with one of the larger elephants on the farm who was about 20 years old. She used to work in the circus and had a large scar from her training days. She moved slowly, but she was so graceful. 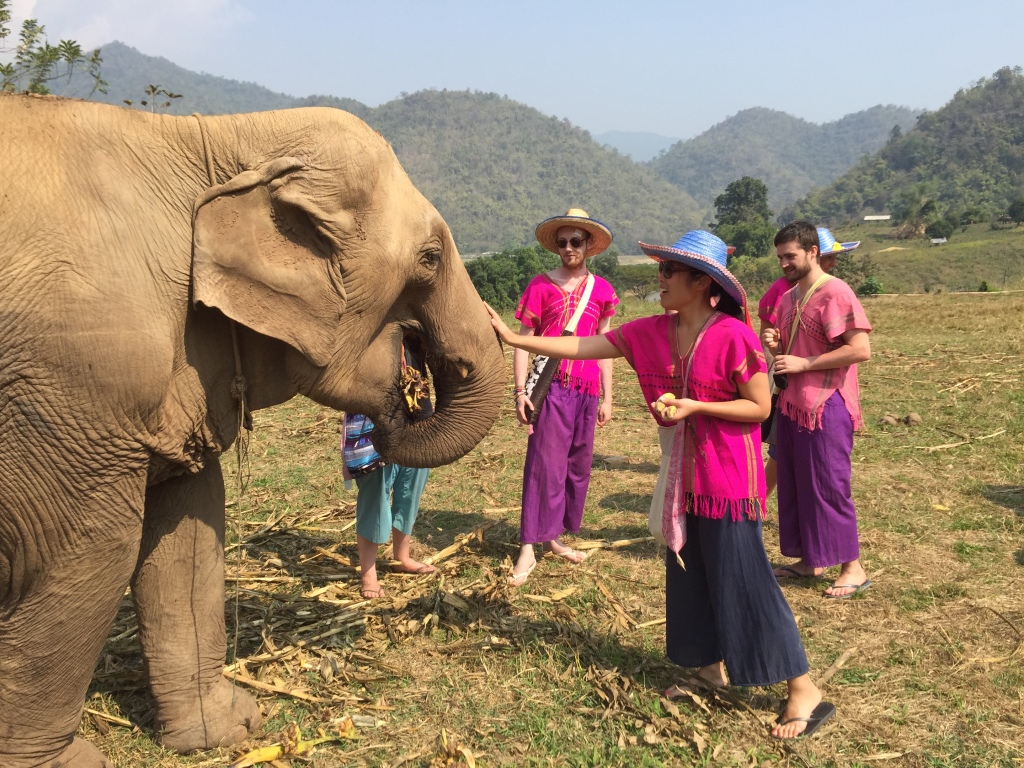 Other camps worth looking into is the Elephant Nature Camp (larger camp and guests get much less dirty) and the Patara Elephant Camp (pricier, but you can do the “Elephant Owner for a Day” program).

Check out our little video at the camp here.

> Thai Cooking Class: When in Chiang Mai, take a cooking lesson! We chose Baan Thai Cookery School because it offered an evening cooking course. We first learned about the Thai ingredients at the local market a few blocks from the school. Then, we cooked five delicious courses, including curry from scratch. All of us went home with a full stomach and a Thai cooking recipe book. Making a few new friends was also a plus! 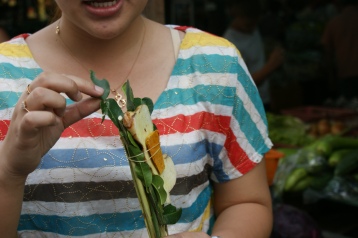 > Wat (Temple) Hopping: There are temples on every corner in the Old Town of Chiang Mai and each temple is designed differently. I would recommend renting some bikes and exploring all the temples. For the famous Wat Doi Suthep perched on the mountains, negotiate a flat rate with a red songthaew driver. The more people you can get to join the truck, the less you pay. We made some new friends with a large group of Korean university students. They thought we were on our honeymoon and sang wedding songs to us the whole ride up. “Happy happy wedding! Happy happy marriage! Congratulations! Congratulations!” … We didn’t have the heart to tell them that we had been married for over a year now… > Chiang Mai University: A Phuket local highly recommended that we check out Chiang Mai University because it was the most beautiful university in Thailand. P and I took the tour around the campus, which is only in Chinese… (my translation skills were definitely put to the test…) The campus itself was ordinary, but there was a large lake in the middle of the campus that was definitely the highlight. If you’re interested in checking out the campus, don’t take the tour. Just check out the lake, which is only a short walk from the entrance of the school.