After months of attempting to confirm a date, my girlfriends and I finally settled on a weekend in August to meet up in L.A. for a short but much needed reunion.  We had all attended graduate school together in Boston, and hit it off right away. Of course, not all of us stayed in Boston. Throughout the years, Chels had moved back home to L.A., and more recently, I had moved back home to the Bay Area. Kim was our only true New Englander who remained in Boston. 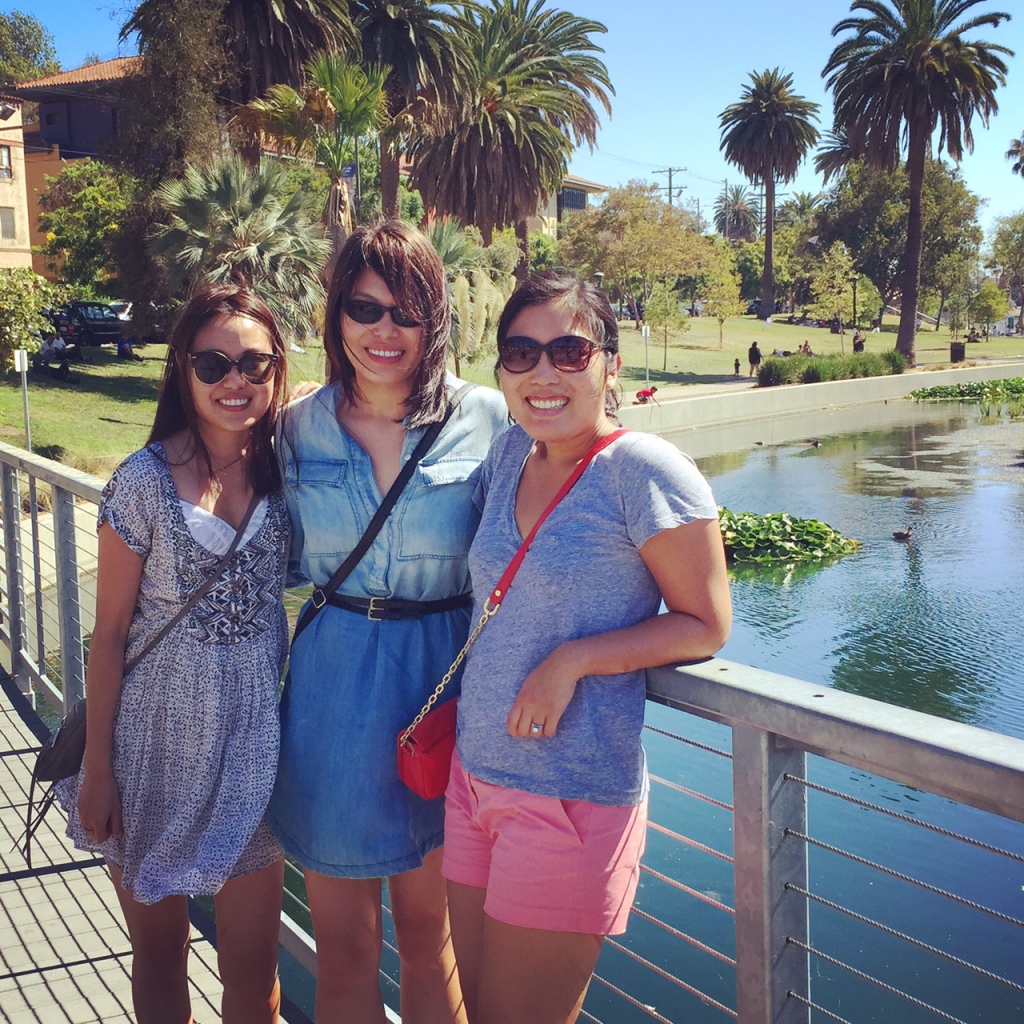 L.A. was the perfect weekend getaway! I was most excited to reunite with these girls that I called family when living on the east coast, but I was also excited for the food. Though we had so little time, Chels showed us her favorite tourist and food spots in L.A., and lucky for us, that weekend happened to be part of Nisei Week Festival. So, we took advantage and ate our fair share of Japanese food in Little Tokyo.

I was the first to arrive. Chels and I explored Santa Monica Pier while we waited for Kim to arrive. The pier was colorful and fun, and the beach looked especially inviting when by mid-morning, we were drenched in sweat by the L.A. heat.

After we picked up Kim and rolled through 7 terminals of traffic at LAX, we headed straight for lunch at Wurstküche Restaurant where we inhaled our bratwursts and fries. And because sausage and potatoes weren’t enough, we each got a fruit bar from Mateo’s for dessert. 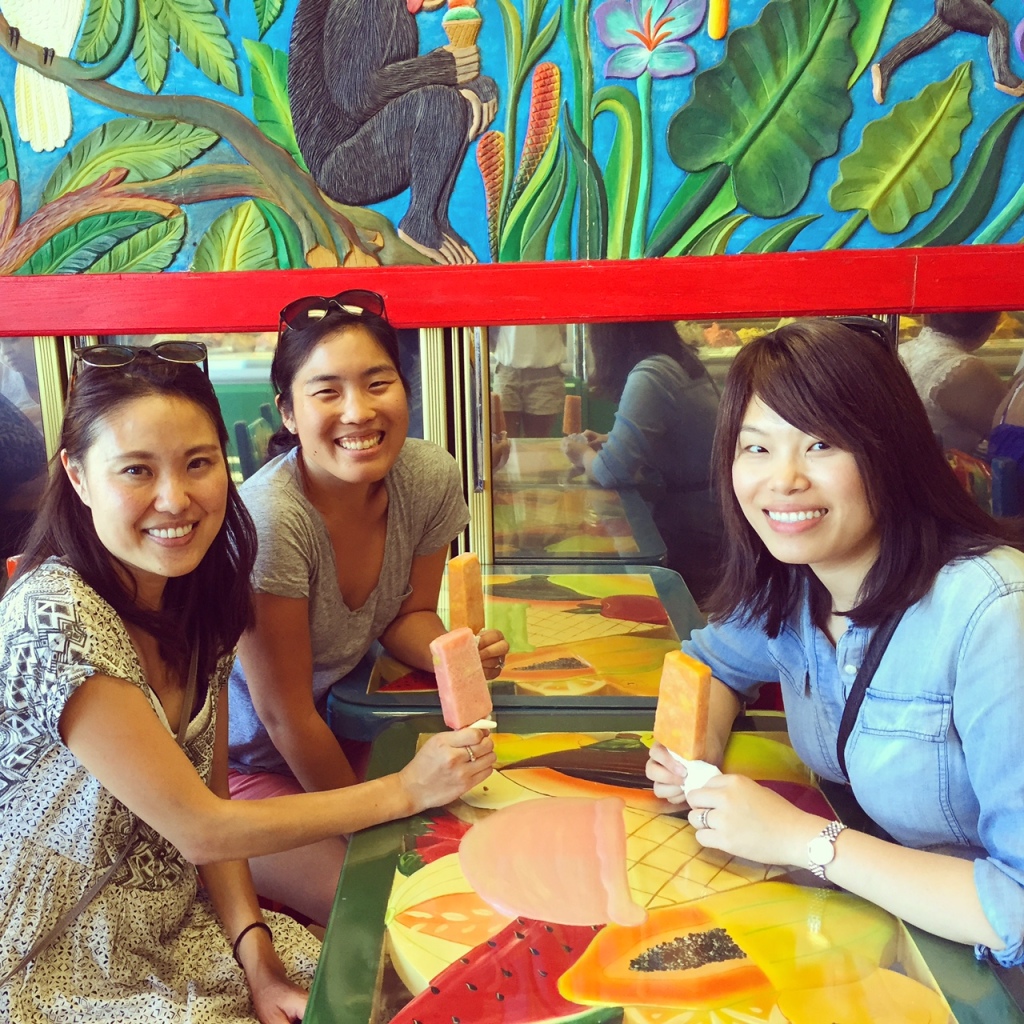 We then headed to Echo Park to take in the views and walk off our food bellies. It was hot hot hot! After walking around the lake, we scrambled for shade and cooled down with some watermelon lemonade from a little makeshift cafe.

When the weather started to cool down, we headed to Little Tokyo to check out the Tanabata festival, which was part of Nisei Week in L.A. Gorgeous, colorful paper lantern-like decor were hung on bamboo structures and there were endless stalls of Japanese food and arts /crafts. For dinner, we slurped some delicious pork soup ramen at Shin-Sen-Gumi and had the most amazing mochi ice cream from Mikawaya, the original inventor of this delicious treat. Unlike the hard mochi ice cream you buy from the grocery store, the outer dough is soft and chewy while the inside is cold and creamy. These desserts just melt in your mouth and are so yummy!

While Chels’ parents planned for a night of karaoke and beers with their friends, we opted to head back to the house after dinner… I know what you’re thinking… lame. But, we enjoyed a wonderful evening soaking in the hot tub and chatting near the fire pit with glasses of ice tea. It was incredibly relaxing and brought me back to our days in Boston.

We woke up the next morning bright and early. We headed to Good Stuff for some morning grub and then we were off to Griffith Observatory. It was packed by the time we arrived, and we ended up having to hike about a mile up. While the views were amazing (you can see the Hollywood sign from up here), we spent more time in the observatory playing around with the exhibits, watching a short movie on the observatory, and taking in the a/c. Fun fact: Griffith Observatory was named after Griffith J. Griffith, a guy with the same first and last name… truly unfortunate, but he went on to become a successful entrepreneur and philanthropist. When in L.A., one must have amazing Mexican food. And that’s exactly what we did for lunch! We gorged on chorizo, shrimp, pork, and beef tacos and sipped on canteloupe juice and horchata at Guisado’s. These tacos weren’t dirt cheap like the ones you find at the street food stands, but were so flavorful! Definitely coming back!

Then it was back to Little Tokyo to meet Chels’ extended family and grub on some of the food that we didn’t get a chance to eat, like poke and red bean cakes. Because Chels’ family were very involved in Nisei Week festivities, we had VIP seats for the annual Nisei Festival parade. Unfortunately, all of us missed it because they had to take me back to the airport. So bummed to have missed an incredible event, and even more bummed that the weekend had to end so soon…

This weekend trip was way too short, but I enjoyed and savored every minute I had with these girls. Looking forward to our reunion next year!

One thought on “The Reunion: 48 Hours in Los Angeles”